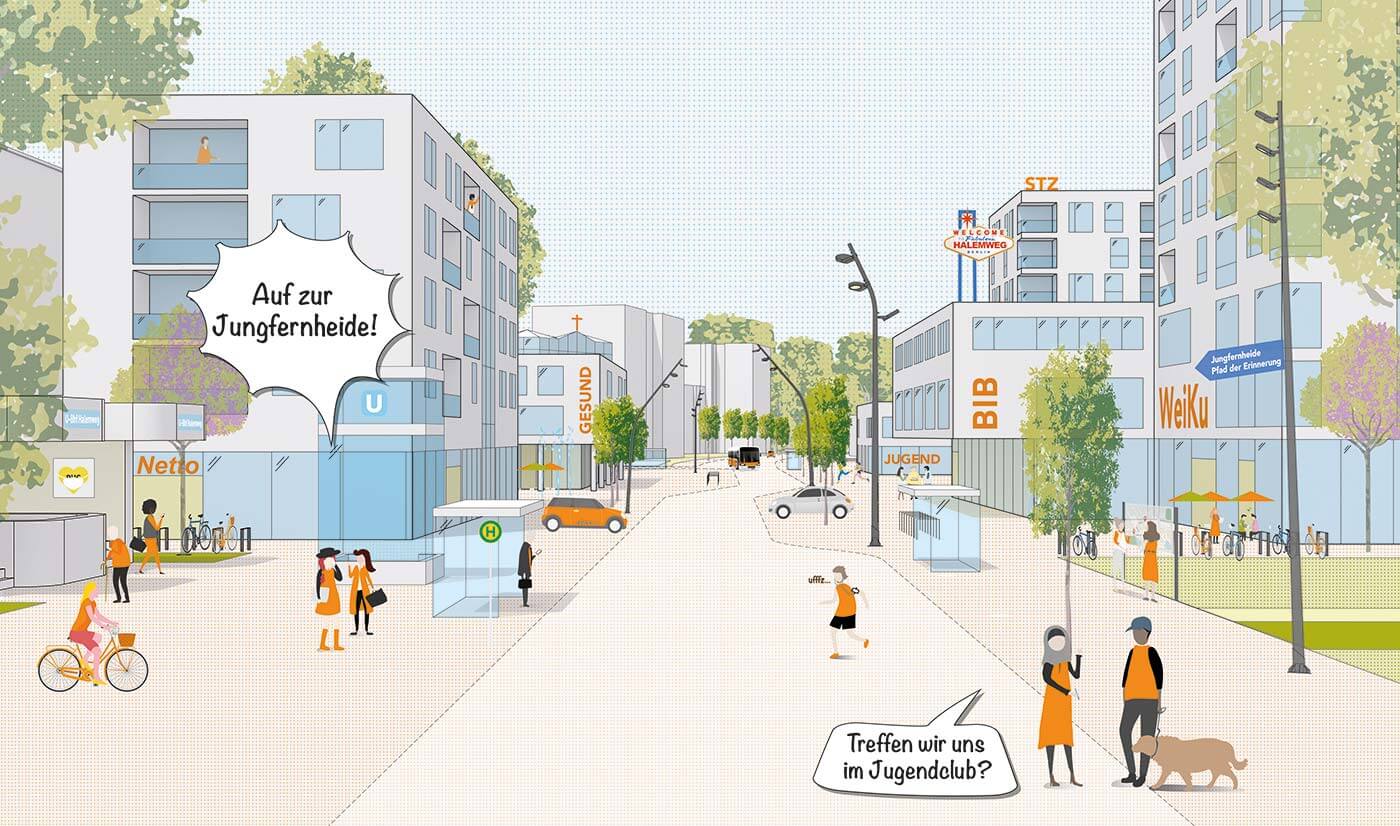 “The street is a room by agreement… a community room dedicated to the city for common use… its ceiling is the sky.” (Louis Kahn 1959) – The new road Halemweg is a street conceived in this spirit and will form the central spine for a series of communal spaces and public buildings. It connects the U-Bahn and the Jungfernheide public park and serves to integrate the neighbourhoods.

The Halemweg works as a linear artery that connects surrounding areas, joins up the old and the new, creates flexible, multi-use spaces and develops further the modern ideal of a green urban landscape for relaxation while at the same time organising the distribution of open areas. Separation of the various modes of transport is done away with in favour of a shared space. The Halemweg becomes an effective linear sequence for circulation and movement, while also providing high-quality accommodation and places for communal activities. Coming out of the underground station, one cannot but admire the vital green space of the Jungfernheide park on the horizon.

The urban space network is a means of organising public areas, creating important pathways and defining uses. Addresses for both new and existing buildings are formed. The basic elements of the spatial network are three areas with different programming, oriented in a North-South direction. Behind this structural approach lies the fundamental concept of “urban lightness”, which aims to further develop and reinterpret modern urban planning without resorting to the typical Berlin block structure. 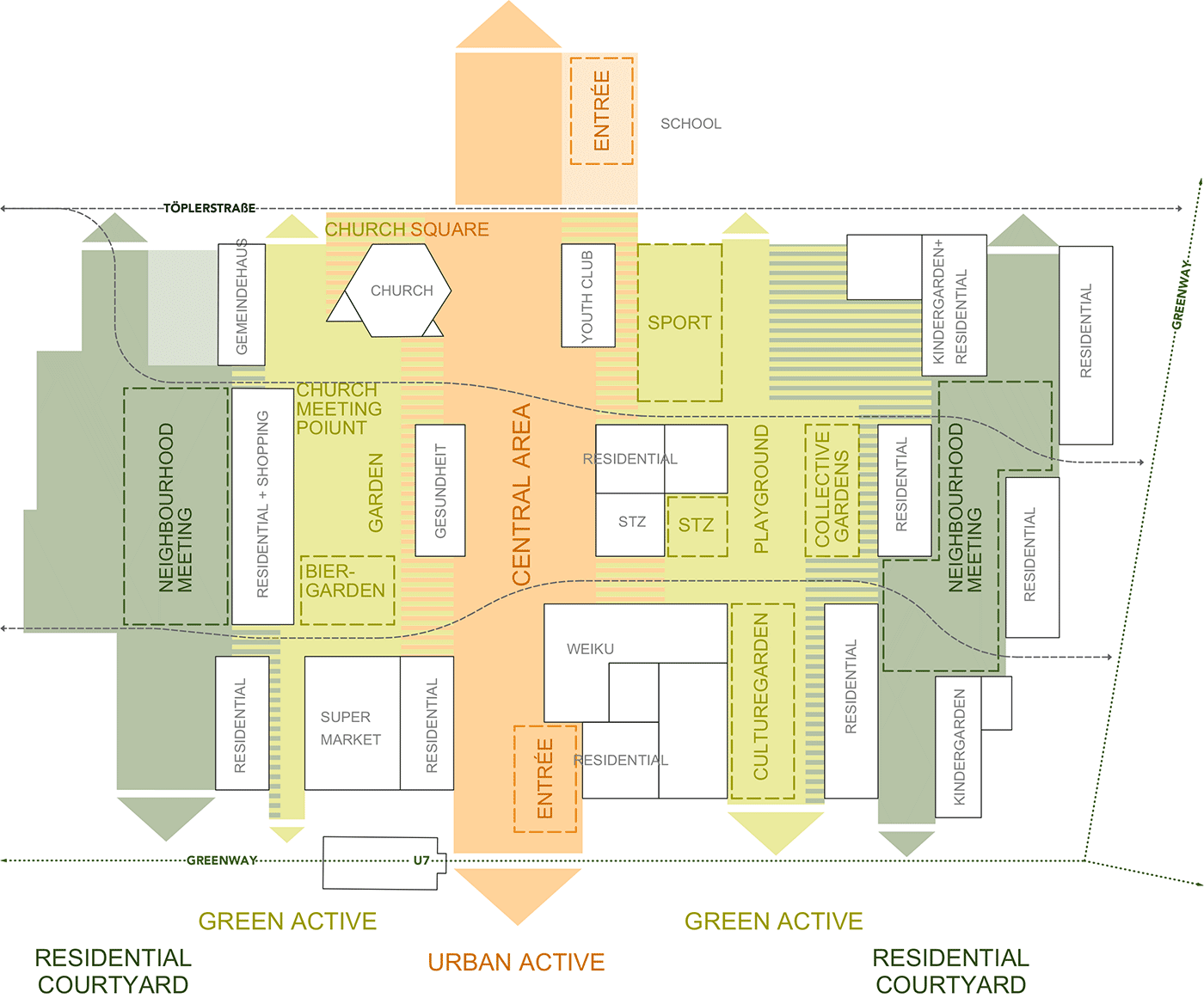 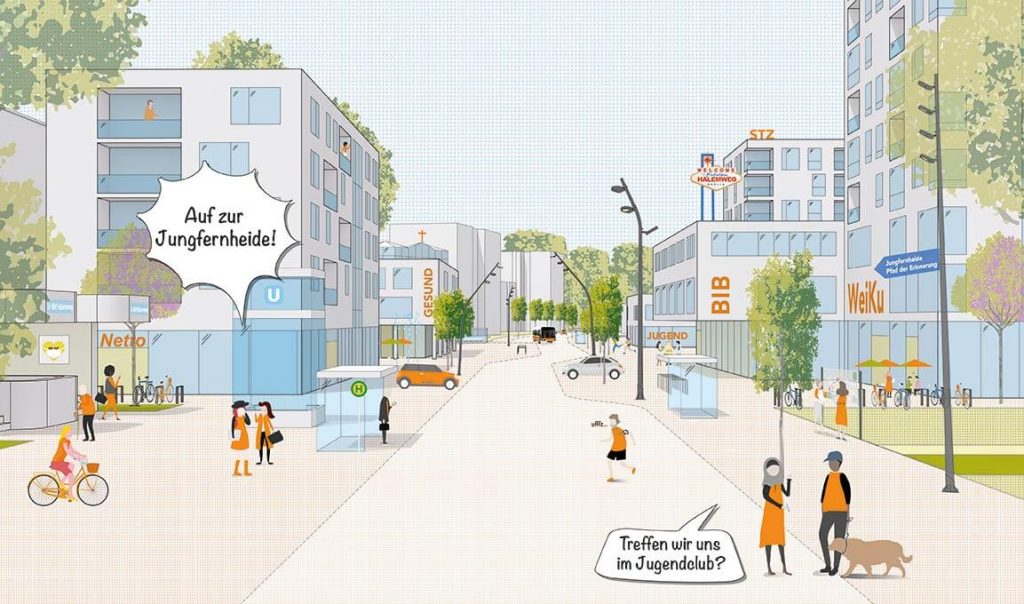 The Halemweg is a vibrant urban area. It becomes an elongated string of squares, clearly revealing its central function; a communal, shared space where no distinction is made between motorists, cyclists and pedestrians; everyone is welcome and everyone respects everyone else. Public buildings face the street and are accessible from it. 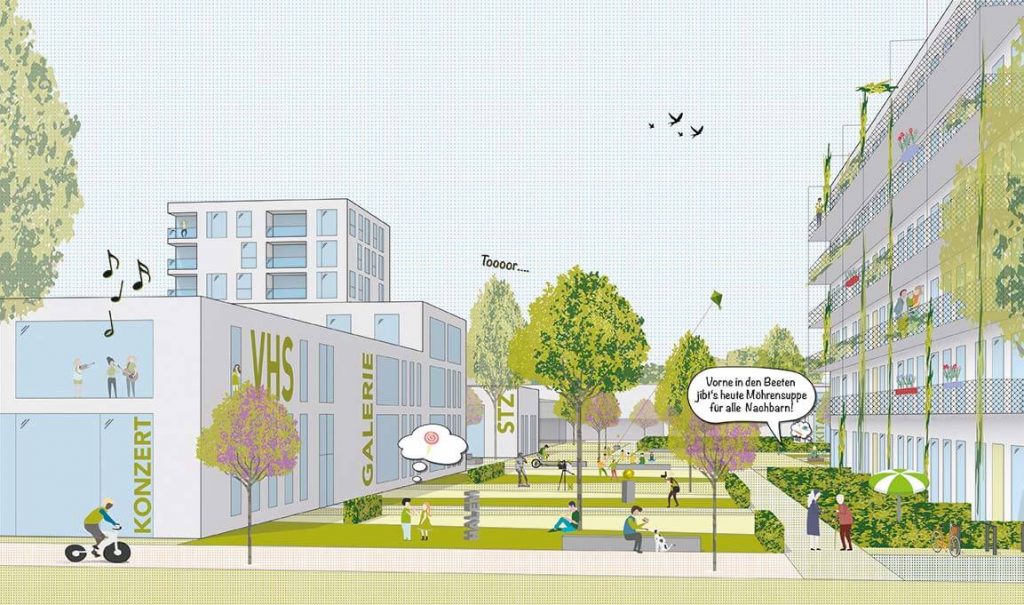 If you leave the Halemweg towards the East or West via square-like extensions, you enter the car-free area of the active green zone. Here, the buildings are located among the landscape’s greenery, in keeping with the ideal of the modern city. The green areas are assigned to the various public buildings on Halemweg and their uses, serving to enrich their functionality. 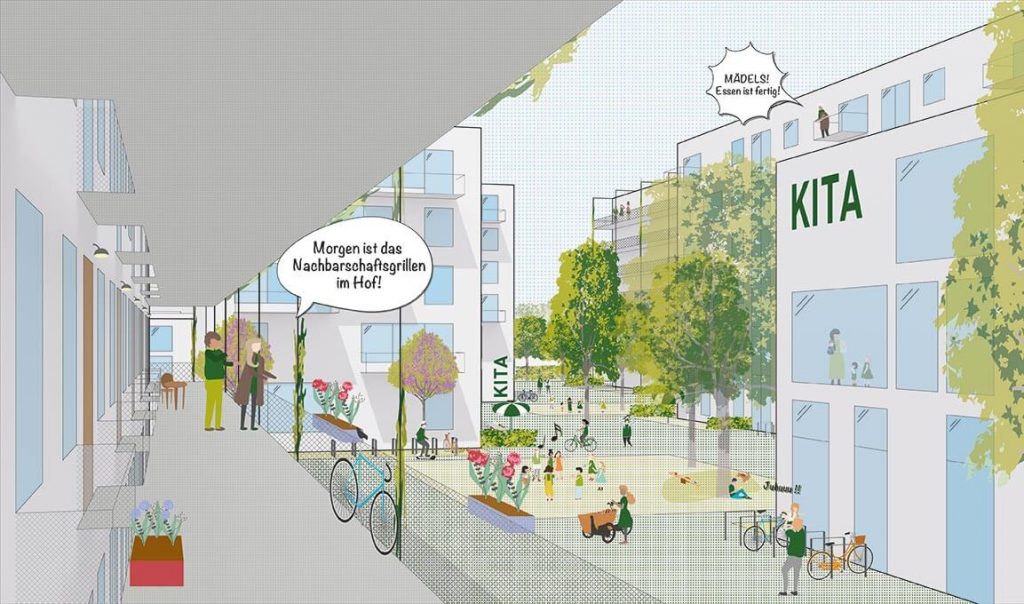 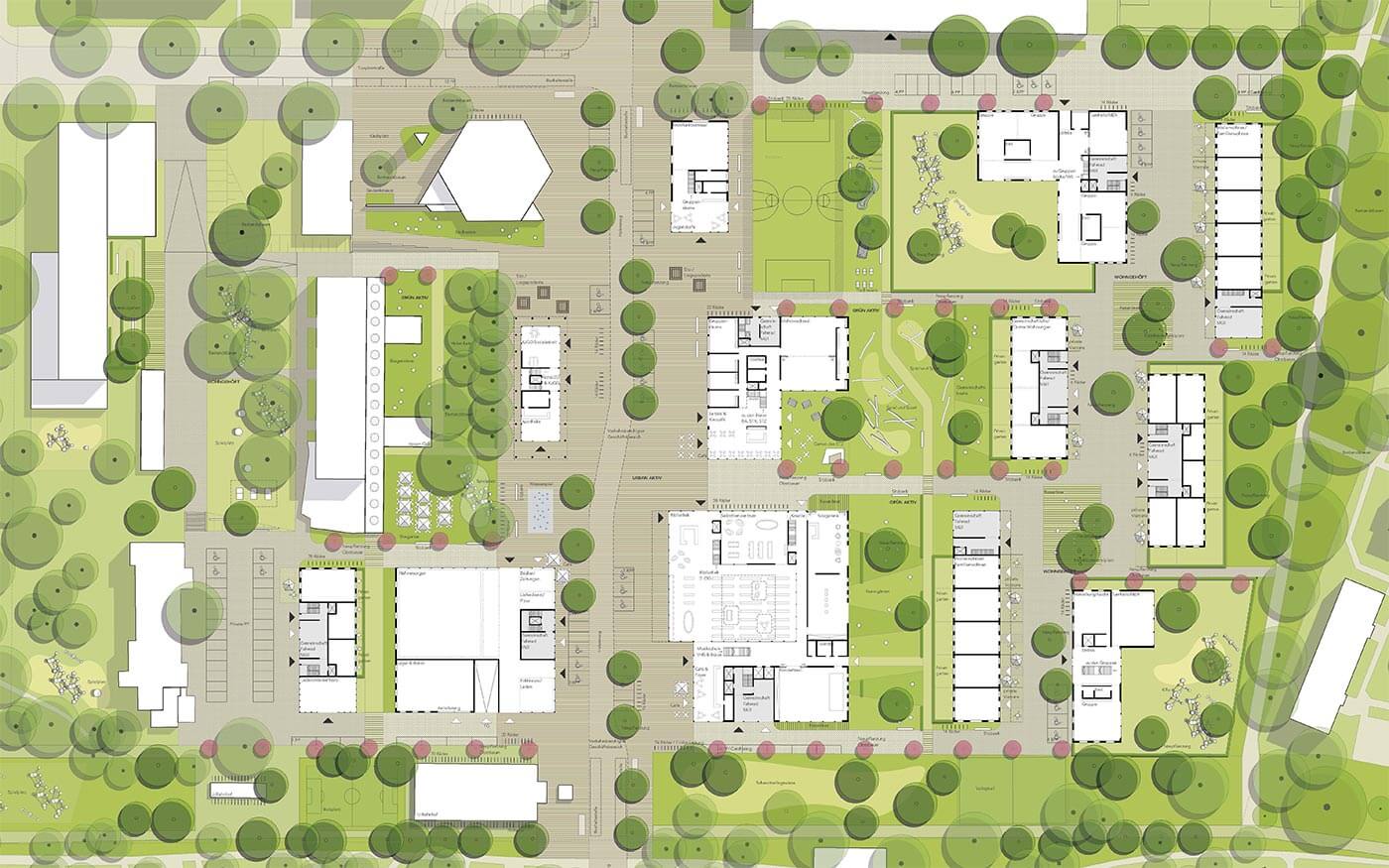 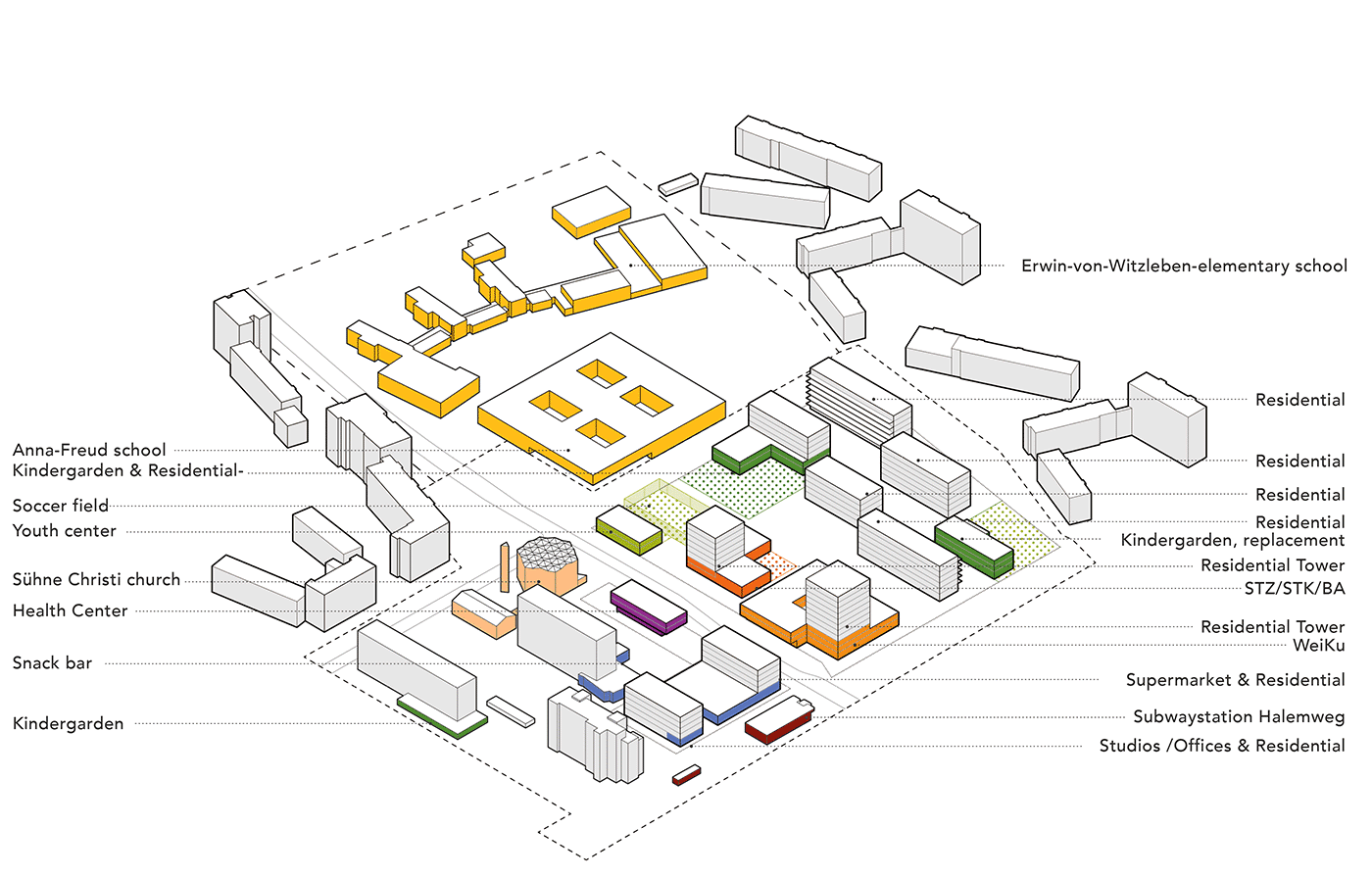